Walter Nishioka was born into a martial arts family on June 18, 1932, in the Kalihi area of Honolulu. His father had taught Ju Jitsu to the Imperial Marines in Kyushu before immigrating to Hawaii. Walter Nishioka learned Ju Jitsu (or Judo) from his father and Henry Seishiro Okazaki, founder of Danzan-Ryu. He also learned other arts in the Okazaki dojo.

During a tour of duty in the Air Force, Nishioka practiced and taught Judo, and learned Karate from Japanese instructors touring Stratic Air Command bases -- Hidetaka Nishiyama, Toshio Kamada, and Isao Obata. Nishioka served as the translator for the tour. After leaving the Air Force, Nishioka went to Japan to practice Judo at the Kodokan, as well as Aikido and Karate. Around 1955, the opened the Goshin Kai dojo at the Moiliili Community Center. He also built a dojo in the large backyard of his home in Manoa. This is probably the oldest continuous Karate dojo in Hawaii and students who learned there are fortunate indeed. 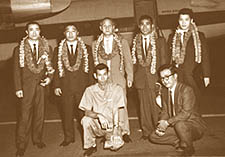 Nishikoa brought several Karate instructors to Hawaii over the years, including Hironori Ohtsuka (the founder of Wado-Ryu and the senior student of Gichin Funakoshi). Ohtsuka arrived on Wednesday, January 24, 1962. He was accompanied by Tatsuo Suzuki, 5th dan, Yoshio Kawaguchi, 5th dan, and Kiyohisa Hirano, 3rd dan. The group practiced and demonstrated Karate on Oahu, the Big Island (Hilo), and on Maui (Wailuku). On Friday, February 9th, they gave a demonstration at the Farrington High School Auditorium. Ohtsuka and the group returned to Japan a few days later.

Nishioka also travelled to Japan and Okinawan to further his own studies. One one such trip in 1962, he took Pat Nakata, who had just graduated from high school, to Japan and Okinawa. Nakata remained in Okinawa and studied with Choshin Chibana and Shinei Kyan. Another of Nishioka's early students was Terry Higa.

Nishioka was a founding member of the Hawaii Karate Congress. It is not possible to estimate how many students he has taught over the decades. Several have formed dojo and teach classes in Hawaii and on the mainland. Nishioka is the Shihan of the International Karate League (Kokusai Karate Renmei), which has an excellent website. It's History page, presents a wealth of information about Nishioka and the development of his modified Shorin-Ryu form of Karate. Readers are urged to visit these pages.

The spirit of Karate is the Aloha spirit
Copyright © Hikari Institute, a Hawaii non-profit corporation and federally
tax exempt organization under IRC 501(c)(3). All rights reserved.